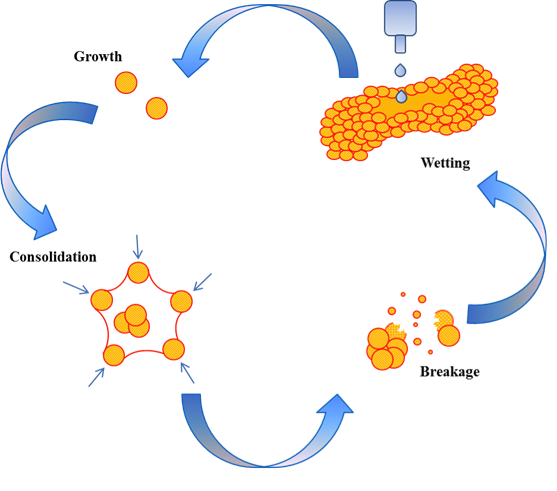 Wet granulation: importance and formation mechanisms of the granulates

Nowadays, granulation products are largely used in pharmaceutical, food, cosmetic, agriculture, zootechnical industries and in the field of environmental remediation. Generally the use of granulates improves measure operations, volumetric dosage, storage, packing and transport of the materials.

Why are granulates important?

The granulation process allows to improve the properties of powders flowability and compressibility due to the more regular shape and larger size of granulate than the original particles. The process is able to reduce the clumping tendency (especially for hygroscopic material). Moreover, it prevents the segregation of particles with different size and density in a mixture of fine powders. Other advantages consist in reducing the problems related to the presence of fine particles; increasing the apparent density, reducing the occupied volume and the transport and storage costs; assuring a controlled release of the active principles, depending on the pore size.

Formation mechanisms of the granulates

The granules formation consists in consecutive and cyclic stages:

The wetting/nucleation is the first step of the granulation, during which the bed of powder is wet by the binder. It is an important phase because the initial agglomerates (nuclei) are formed. The formation of this nuclei depends on the kinetic and thermodynamic of wetting. The ideal condition for nucleation is when each drop sprayed on the powder bed will form a granule (drop controlled regime). Subsequently the nuclei adhere one to each other, thus the granules are formed and can grow by coalescence or layering. When the granules are subjected to the action of mechanical moving parts of the equipment (blades or impellers), they begin to consolidate. The impact causes the reduction of both size and porosity of the granule. Then the friction force exercised on the dry granules can be cause of their eventual breakage.

These mechanisms coexist in all processes of wet granulation, however, they depend on the type of equipment and operating conditions used. So, a careful analysis of the four phases of the process allows to estimate the final characteristics of the granules.

We use cookies to ensure that we give you the best experience on our website. If you continue to use this site we will assume that you are happy with it.Ok