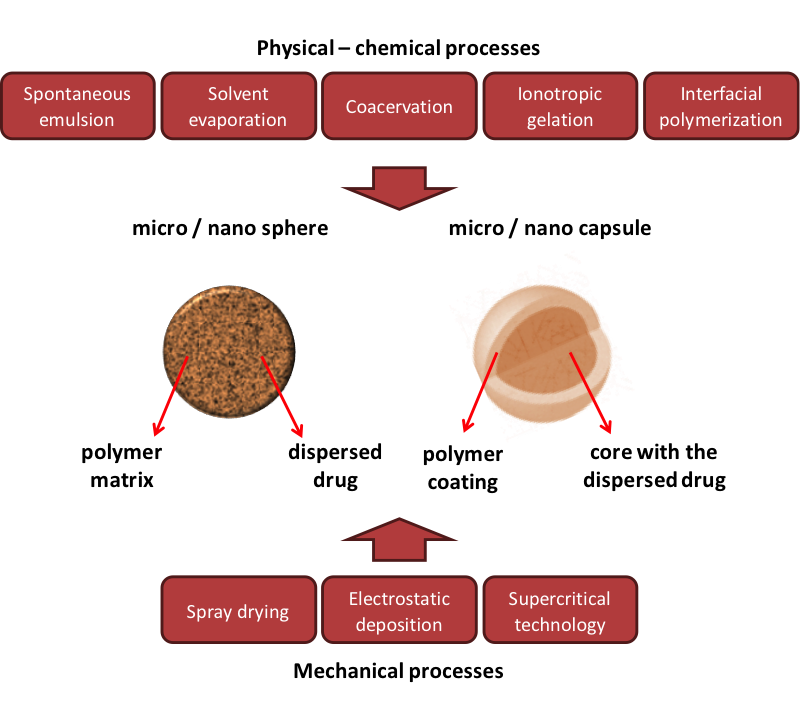 Several compounds were incorporated in micro or nano carriers by different techniques, in order to stabilize them, convert them into powders, mask undesired taste, provide modified release properties. These systems are then exploited for therapeutic purposes to transport the active principle in a controlled manner from the site of administration to the target, trying to overcome the many physiological barriers.

What are polymeric micro and nano particles?

The word micro particles means particles with micrometric dimensions in a range between 3 and 800 µm, whereas the nanoparticles are colloidal systems with a range size of 10 – 1000 nm. Both can be classifiable according to their structure in micro/nano capsules and micro/nano spheres (Figure 1).

Micro and nano capsules are vesicular systems, which can be classified as reservoir systems: a central core (reservoir), containing the active principle, is surrounded by a continuous polymeric membrane. The coating is generally a polymer which has to show high coesion and physical-chemical compatibility with core, strength, flexibility, impermeability and stability.

Micro and nano spheres are matrix systems where there is not a sharp difference between internal and external structure, but the active agent is dissolved or dispersed in the polymeric matrix. The coating materials have to respect some requirements: chemically inert, not tossic, biodegradable, biocompatible, simple to sterilize.

The preparation of micro and nano particles is achieved by both physical-chemical and mechanical processes (Figure 1).

Several processes can be also denoted as “two steps procedures”, with the first step involving the formation of an emulsion and the second one consisting in the formation of particles from the emulsion. Most of the emulsifications methods are based on mechanical processes, on the agitation or extrusion principles, and are related to the high-energy emulsification techniques. In the methods based on an extrusion process, the dispersed phase is forced to permeate through a microfiltration device (microchannel or membrane), in order to have droplets, with a specified size, of the dispersed phase in the continuous phase. The ultrasonic emulsification, based on the mechanism of the cavitation, requires less surfactant assures smaller sizes than the mechanical agitation. Instead, the spontaneous emulsification (only physical – chemical) process can be classified as a low-energy emulsification method. The second step of particles formation from the emulsion can be achieved by solvent extraction or evaporation. Another chemical-physical technique, coacervation, or desolvation, consists of a separation of a polymeric solution into two miscible liquid phases, a dense coacervate phase and a dilute equilibrium phase, after the change of some parameters, such as pH, ionic strength. Again, the polyelectrolytes can aggregate into micro or nanoparticles by cross-linking with micromolecular substances with opposite charge via electrostatic interaction, obtaining the ionotropic gelation. A further distinction can be done between techniques based on the use of preformed polymers (as previously described) and techniques exploiting the direct polymerization of monomers, that can be considered as a sub-group of the physical – chemical processes.

Looking inside the mechanical processes, the spray drying is the one of the most reproducible and easy to scale up techniques, where particles are produced from liquid streams atomized in fine drops, that are dried under a flux of a gaseous medium, usually the air. A modified version of spray drying is the supercritical particles formation technique where the solution of drug and supercritical fluid is rapidly expanded across an orifice into ambient air or in a liquid solvent. Another method similar to spray drying is the electrostatic deposition: the core droplets, obtained by nebulization, acquire electric charge, and interact with coating droplets with opposite sign.

When the use of micro and nano particles is fundamental?

Oral administration of an active principle is convenient and effective because of the high exchange surface available for the assimilation of the principle in the gastro-intestinal tract. However, the pharmaceutical form has to resist the very acidic pH of the stomach and the enzymes in the plasma and in the liver. The use of micro particles in the production of smart enteric tablets ensures to be taken by empty stomach (in contrast to the commercial ones), without the problem of active principle loss in the stomach. In fact, in an neutral pH environment (for example, the empty stomach), the micro particles on the surface of the smart tablet are “nicked”, but the most inner micro particles remain intact. Consequently, only a small percentage of the active substance is lost because released in the stomach, but the tablet remains practically unchanged in the intestine, where the drug is absorbed (Figure 2 a).

On the other hand, nano carriers can be directed to the target in a passive or active way (Figure 2 b). The passive targeting, also named enhanced permeability and retention effect (EPR), is based on the fact that large molecules or small particles can penetrate pathological vasculature of an unhealthy tissue without being eliminated. The active targeting is realized by functionalizing the nano carriers surface so that they can be recognized and bound to the surface receptors, react to local stimuli of pathological area, such as changes in pH, temperature and chemical stimuli, penetrate cells avoiding the lysosomal degradation (by adding to nano- carriers proteins or lipids to increase the penetration ability).