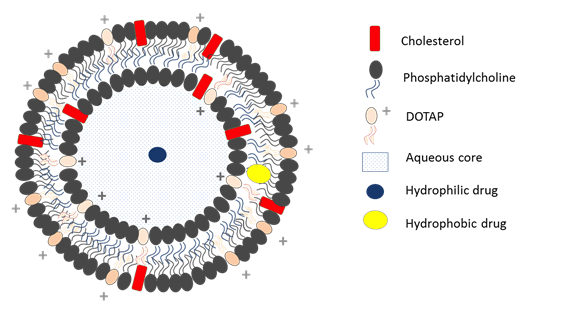 Liposomes are carrier systems suitable for the delivery of different active molecules; due to their unic features, they can be utilized in many fields of application such as pharmaceutical, medical, nutraceutical, cosmeceutical. In medical field liposomes are used for the controlled delivery of drugs in order to realize the full potential of therapeutic molecules, making them available for the right time and in the target tissues/cells where they are needed.

In the food sector, liposomes have a great potential as packaging materials for the preservation of many bioactive ingredients including compounds with poor water solubility, vitamins, proteins, peptides, etc.

The development of safety and efficacy smart-liposomes with tailored features (in terms of size, charge, load capability, stimuli responsive ability) for drugs and nutraceuticals bioavailability is essential for the development of new therapeutic strategies, such as the use of Nucleic Acid Based Drugs (NABDs) in gene therapy and for the production of new food safety formulations.

Micro and nano liposomes are highly biocompatible and biodegradable drug delivery systems which, due to their low intrinsic toxicity and immunogenicity and their capability to incorporate hydrophilic and hydrophobic drugs, are the ideal candidates in the controlled release of many kinds of active ingredients included drugs for cancer therapy. Indeed, their similarity with biological membranes and their flexibility to couple with site-specific ligands (molecules which allow to achieve an active targeting) make them increasingly important to deliver drugs based on nucleic acids (NABDs) for gene therapy.

Liposomes as controlled drug delivery systems can minimize drugs degradation and loss and at the same time reduce side and prevent collateral and toxic effects; can increase drugs absorbance and bioavailability improving their biodistribution and penetration in cellular compartment.

In general, diffusion and erosion are the main two mechanisms involved in the release of active ingredients from liposomes.

In particular, in medical field, to overcome the limit of aspecificity of the common therapeutic agents, liposomes encapsulating active ingredients have to improve their accumulation close to the target cells and facilitating their intracellular delivery. This is possible through two key steps: the endocytosis and the endosomal escape. The endocytic pathway is the major uptake mechanism of cells and represents the way by which liposomes are internalized into cellular compartment: the lipid bilayer of the liposome and the lipid bilayer of the cell membrane interact each other giving rise to a fusion between the two membranes. The process is facilitated for cationic liposomes due to the interaction between their positive charge with the negative charge of cell membrane.

Here liposomes destabilize endosomal membrane and are degraded by specific enzymes, ensuring the cytosolic delivery of therapeutic agents from the endosomal one; the mechanism is called “endosomal escape”. By this way liposomes avoid the degradation of active molecules in lysosomes, cellular compartments in which waste and foreign materials are break down, and allow the expression of many therapeutics, such as NABDs, within the nucleus. The process is schematized in Figure 2.