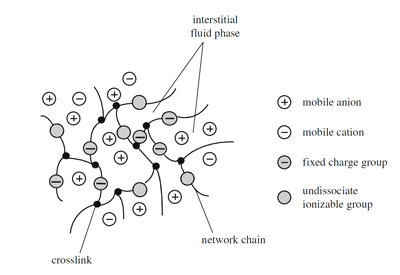 To explicate its therapeutic effect an Active Ingredient (AI) has to be available at a certain dose for a given time in a specific environment. To fulfill these requirements controlled delivery systems need to be properly designed, so that the drug can be released with desired release kinetics (zero-order), in response to external stimuli (sensitive systems), and/or in a certain environment (targeted delivery systems). Hydrogel-based delivery systems are good candidates when it comes to controlled AI release and, despite they have been extensively used  in several fields (pharmaceutical, agrochemicals and so forth), a full understanding of the phenomena involved – and their detailed mathematical description (modeling) – is an objective still unfulfilled.

What is an hydrogel?

Hydrogels are three-dimensional, hydrophilic, polymeric networks capable of imbibing large amounts of water or biological fluids. A distinction has to be done between hydrosols and hydrogels, with the first are indicated solutions in which polymers are dissolved in water, instead, with the term hydrogels cross-linked hydrosols are identified. These last, due to the presence of chemical or physical cross-links (junctions, tie-points, entanglements) in the polymer network, are unable to dissolve in water but they can absorb it increasing their volume.

The system so formed is very  complex and generally can be considered as made of three different parts: the solid polymer network matrix, the interstitial water or biological fluid and the ion species (Figure 1).

The behavior of the system is the results of the interaction of all these three parts with the external environment. Indeed the water adsorption due to diluting force (the entropy of the system increases, like in the normal solubilization process of a linear polymer) causes the network swelling. Therefore the chains between network junctions are required to assume elongated configurations generating an elastic force. As swelling proceeds, this force increases and the diluting force decreases. Ultimately, a state of equilibrium swelling is reached in which these two forces are in balance.

When these polymers have an ionic network with ionizable groups, the swelling ability may be greatly increased as a result of the localization of charges that, setting up an electrostatic repulsion, tend to expand the network. However the fixed charges are not the only ions present in the gel, at least a stoichiometric amount of mobile counterions has to be considered. These, by screening effect, reduce the ideal swelling capacity due to the repulsion. Moreover the swollen ionic gel can exchange ions with the solvent closely resembling a Donnan membrane equilibrium. The polymer acts as its own membrane preventing the charged substituents from diffusing into the outer solution.

When a dry hydrogel-polymer-based, loaded with an AI, is immersed in a physiological fluid, the solvent starts to penetrate inside the polymer matrix.

If the polymer shows a glass transition temperature higher than the room/physical temperature, when the solvent concentration exceed a threshold value, polymeric chains unfold so that the glass-rubber transition occurs and a gel-like layer, surrounding the matrix dry core appears. The moving front at which this process takes place is called “swelling front”, which separates the swollen from non-swollen matrix. In the swollen region the polymeric chains assume an elongated configuration that allows the contained AI molecules to easily diffuse toward the outer dissolution medium, once that they are dissolved. Indeed depending on the drug solubility, in the swollen layer there could be zones in which the drug coexist in the dissolved and dispersed form. The front that separates the swollen matrix, containing only dissolved drug, from the swollen part that contains both dissolved and dispersed drug, is called “diffusion front”. Additionally, on the zone at which the swollen matrix is in contact with the outer medium a third front can be defined: the “erosion front”. On this boundary the polymer network became extremely hydrated and process like chains disentanglement takes place, “eroding” the matrix.

All these regions are shown in Figure 2, where a picture of a swollen tablet subjected to radial dissolution test is compared to a scheme of a hydrogel-based matrix hydration behavior.